Hey hey! How's it going? I thought I'd post this story this week, only because I'm going on holiday tomorrow morning, and I won't be here to post next Thursday. This is new to most of you, but only required a little bit of editing on my part. This received some good feedback when it was shared in class, so hopefully you'll like it. Drop me a comment if you love it, or if you hate it, all feedback is good feedback!

‘I’ve been in love with Grace for one year, two months, three weeks, two days and half an hour. I first saw her in the supermarket, then two weeks later in the gym. I saw her two more times in the supermarket, and then, I saw her in my mother’s living room.
I was scared to look at her but I could hardly look away. My mother is used to me being quiet, but I think even she noticed something was a little off.  I hardly touched my dinner and was scared to drink my tea, in case I spilled it or dribbled it, or choked on it; then I’d look stupid in front of her and she wouldn’t smile at me anymore.
She looked different when I saw her in October. It had been three months and I was starting to worry that she’d gone away. She’d styled her hair differently this time and her make up was darker. She looked really beautiful, even though she wasn’t smiling. I wondered if she looked angrier because of something I’d done. I didn’t bother her this time, because she looked like she didn’t want to be bothered.
I next saw her in December. She looked radiant; she was wearing a thick red jumper and was really beaming at me. I took her to lunch that day, and then back to my place, where I plucked up the courage to speak to her;
“You look really beautiful” I said, she only smiled in return. “That’s one of the things I like about you, you’re modest.” I told her. She was still smiling back at me, her face hadn’t changed at all but I didn’t mind. She had one of those really lovely smiles that brightened up the room. She was just so quiet; why wouldn’t she speak to me? “Tell me something about yourself” She still only smiled back. I didn’t know whether to be endeared or annoyed. We watched some TV together and then I took her for a walk to the park. We sat there on the bench for an hour or two, and then I went home, alone.
I felt bad about leaving her in the park, but then next time I saw her; in February, she was smiling at me again. She looked even more stunning now than she did in December – she was wearing a blue dress, it was a really nice blue too; it complimented her eyes and her skin tone perfectly. She was telling me about her New Year’s diet, and how she lost a stone in three weeks. I was fascinated by her words. I wanted to take her out again that day, apologise for leaving her in the park like that; I think she’s the one, so I wouldn’t want her to ever think badly of me. Just as I was about to take her from the store, another man took her away from me. I was crushed, because she’s mine.’
‘So what did you do then?’
‘Well, I followed them. I wanted to see where he was taking her, and what he thought he was doing, taking my girl away from me.’
‘Where did he take her?’
‘I don’t know. I decided that if she liked this guy, and he could make her happy, she should go with him. She might decide that she likes me better and come back to me. I’ve seen her around since, and she’s been smiling and wearing nice clothes; so I guess she was happy.’
‘Okay, Adam, this has been a good session. I’ll see you again next week.’ I closed my notebook and left the room. Three assistant nurses were moving towards me, anxiety and the need for gossip deepening their crow’s feet and loosening their hairspray.
‘Well, what’d he say?’ asked the eldest, ‘He seems so…so normal, I can’t picture him doing what he did!’ They stood staring at me, expectantly, their eyebrows raised in encouragement.
‘Look. He firmly believes – or he wants us to believe that he firmly believes – that he simply let the guy walk away from the supermarket – ‘
‘What, he doesn’t remember the fight at all? But he bit chunks out of the guy’s arm!’
‘I know that, but judging by what he’s told me, he was in a different mental state to the one which he is in now. My guess is, he really doesn’t remember what he did to this guy, and after a couple more sessions; I think I might be confident enough to swear it in court.’
‘Wow. Imagine if a bloke would react like that to you, Susie! It’d be scary, but really romantic too. You know, in a psychopathic sort of way. So, what does this girl look like?’
‘Well, you can see her in just about any newsagent’s, supermarket - basically anywhere that sells magazines.’
‘What, Why?’
‘She’s Grace McEllen. He saw her photo on the front of a magazine, and constructed an entire narrative in his head; wherein she was his girlfriend and not just a photo on the front of a magazine. Which explains why she never said a word to him, apart from to tell him about her diet. So, I’ll catch you ladies at lunch? I have my 2 O’clock now. Bye.’ I turned on my heel and left them standing there gawping. You’d think that working in an institute such as this would make them more ready for that sort of story. Evidently not.

So that's it! Hope you liked it; personally, I've never been overly happy with the ending, so if you have any suggestions, I'm open to them, like I said, drop me a comment! Have a great week, I'm hoping to find time next week to write part 4 of The Following with a view to uploading it on Saturday. I do have a post in mind, which I know quite a bit about, and would be able to get some accompanying pictures for next week, so that could happen as well.
Oh! and while we're here, I wanted to share this with you, because I made it on this website to celebrate the start of series 3 of Game of Thrones. 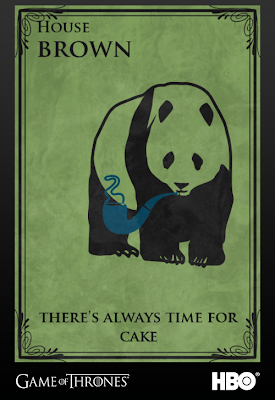 They're really fun to make and you can create yours on the link I put up there. It made me laugh more that my friends who created them were putting inspiring slogans like 'Strength to the end' and things like that, with a flaming torch icon, and I come along and give a panda a smoking pipe and talk about cake. That's where my priorities lie! I'd love to see yours if you make one, so if you can add pictures to comments, drop it in, and if not, mention @EmphaticPanda in a tweet or Instagram, if you have either or those!

Thanks for reading! Laura
xoxoxoxox
Posted by Unknown at 15:28