Hello! Today, I was going to do two book reviews, (they often end up shorter than film reviews because I just don't do them as often/don't have as much to include in terms of characters etc.) but I saw a film yesterday that I just needed to talk about.
Now, this film isn't even on IMDB under the same name, it's on there as 'True Bloodthirst', which, A) should be an indication of how good it is, and B) should ring some of the same alarm bells that it did for me, that it's a bit too similar to True Blood in some ways.
It was also shown on SyFy channel, which may also lead you to the fair assumption that it's not going to be great, being as they've shown films called 'Sharknado' and 'Jersey Shore Shark Attack'. I did find a trailer for it on YouTube though, so you get to enjoy nearly two minutes of this: (I'm not even sorry, I sat through two hours of it)

Even the trailer for this was difficult - I usually put it on here by just putting in the YouTube URL, but that wouldn't work, would it? No. Anyway. This trailer actually makes the film look action packed and exciting, but it wasn't. I can't even fluff around the issues - it was a bad film; for so many reasons. I can appreciate that this is a low budget film, far lower of course than all of the other films I've reviewed on here, but that's not excuse. Honestly.
So what was wrong with it? Well, like I said, it's very similar to the opening of True Blood, with all the news reports of Vampires existing, and how they're in conflict with 'humans' and all that jazz. Also, they seem to have lifted at least one instance of dialogue, which is something along the lines of 'You're saying that (something that isn't a vampire) exist?' 'You didn't know vampires existed until (a short time ago), how do we know what else is out there?'.  That's not a massive issue for me, it's just something I noticed having watched True Blood.
Anyway; without going into massive amounts of detail - the special effects are terrible given that it was released in 2012 (fair enough, it's low budget) but I swear more can be done in that respect. The 'storyline' (we'll call it that for argument's sake) was contrived, and didn't really make a great deal of sense. I'm not going to even bother with not revealing spoilers, because you can guess everything that happens from the off, and I might just save you two hours of your life. The basic premise is that vampires have always existed but haven't come out, so then they do, and then 'humans' segregate them, and force them into their own quarantined area. Fine, that's all in the first ten minutes anyway. Then two vampires and a 'blood dealer' are killed by some...thing with snappy teeth and a 'scary' prosthetic/CGI face that can fly. Cut to - the office of Kovaks (Roark Critchlow), where he informed of the deaths of the afore mentioned vampires and dealer, by Derricks (Neil Jackson). Then a bunch more characters are introduced very vaguely and then they have guns out of nowhere, then they aim them at some vampires for... some reason, they they all work together to take down the 'scary', flying, vampire eating 'things' which turn out to be vampires who have been infected by a virus which has turned them into primal, zombie-like vampire being things. As you can see - very 'thrown together', 'let's give these hot chicks some guns because then it will be a great movie!'

There were a few little things that happened which made me wonder who threw this together:

- It's set in Bucharest, Romania (obviously because that's where vampires live) but nearly everyone had an American accent, then there's the guy who worked for Kovaks (who I think was Jonathon Hargreaves, playing Innes-Dunchley, but it might not have been - I don't remember anyone's name, I've literally had to look up everything. I'm not even going to pretend I knew) who has a Manchester accent (northern England) and sticks out like a sore thumb.
- When the vampire/zombie things die, they disintegrate. That is something which is shown in detail. Also, one of the female vampires - who I think we were supposed to feel empathy for - goes into the sun without her ninja hood on, she turns to dust. That's all fine, because that's what vampires have always done through the ages. What bothers me here, is that seconds later, one of the vampire zombies flies out of the underground den they've just blown up with lots of fire and explosions, (yes, 'how'? that's not the bit which bothered me) it burns a bit in the sun, then leaves a perfectly preserved skeleton - complete with charred flesh. I understand that this is so that we can find out that the vampires are getting the virus which is turning them into these undead weird things, but if that's what you want to do, then don't turn other vampires into dust. It's a weird double standard that doesn't work.
- Derricks' vampire wife just happened to be where the boss vampire lives. Just by chance. Completely out of the blue. Boss vamp doesn't even ask her name. Just sends her out. By chance. Chance.
Finally - and I could go on for longer, but let's not - there are too many characters. I've mentioned four, then there's Johnny Harker (Andrew Lee Potts), his sister Katya (Claudia Bassols), Harker's girlfriend Celeste (Heida Reed) who is, and I quote; 'not a prostitute, she a dancer, the hours are better' - which I think was meant to be a joke, but it really missed the mark due to all round terrible acting. Anyway, they team up with Nikolai (Ben Lambert) and some of his vampire friends who weren't named (to my knowledge) or characterised. And there's the guy who was let out of prison with Harker. (For whatever reason.) Now, I appreciate that they have a 'team', but when it comes to screenwriting, or writing stories in general, we're taught that you should have three strong main characters, four, maybe. They should be well characterised with their own voices, and storylines and whatever. Then some extraneous characters, who we like, but don't necessarily care about, nonetheless, we should be sad when they die. With this, there are so many characters, that it's not clear whether they're meant to be main characters, or supporting characters, and it all gets confusing. Also, Harker - who is definitely meant to be a main character - is so unlikeable. He's whiney and bitchy and doesn't learn from his errors and only thinks about himself and he's poorly acted which just doesn't help.
To be fair to Ben Lambert and Neil Jackson, their acting wasn't bad. In other words, they did a really good job of acting out what they'd been given. I liked their characters and if it weren't for them, I just don't know if I would have stuck it out. Claudia Bassols wasn't bad either, she was given a pretty vacuous character to play. As for every other person in the film. I cannot say the same. The acting was bad. Really bad.
I've really got to wrap this up now, because this has gone on for far longer than I intended it to, and in all respects, it's been more of a rant than a review. I just needed to get this off my chest, and maybe save some people two hours of their life. Now, I think, moreover, I hope, that this is a 'mockbuster', but I'm just not sure. I can't tell if it's meant to be a long winded pun, or if it's intended to be serious. All in all, I have to give this one and a half pandas. That might be generous, it might be tight, I don't know how anything works any more. 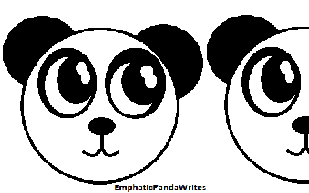 Thanks for reading! Sorry about everything that just happened. If you have seen this (you poor soul) what did you think? If you haven't, are you going to  based on this? Or will have I really, really not sold it?
I'll be back on Friday with part 3 of Seasons, which will hopefully turn out marginally better than Vampyre Nation did. :)

Laura
xoxoxox
Posted by Unknown at 13:27