Hello! As you know, I went to Cyprus last week, it was my first time abroad and it was incredible. I thought about doing a mini blog post from my iPod during the week because I got the blogger app and it's actually really simple to use, but I just didn't get a whole lot of time to sit down and do it. Then I was going to do a post about it on Sunday when I got back, but seeing as I haven't finished the book I'm reading, or seen any new films etc, I thought I may just as well dedicate a Tuesday review slot to it.
There will be a few photos, but not as many as I'd hoped being as I did my usual fun trick of leaving the lead for my camera in another part of Britain, meaning I can't get pictures from my camera to my laptop. Though, saying that, it's more than probable that I just haven't unpacked the bag that it's in from when I came home two weeks ago. That gives us all something to look forward to anyway.

So, the hotel we stayed in was the Elias Beach hotel in Limassol, southern Cyprus - run by Kanika hotels and resorts. We went all-inclusive so were really impressed by the massive choice of freshly cooked foods, and also the extensive range of cocktails and every other type of drink which was included in the price. Now, I'm massively into food, I enjoy cooking it, reading about it, learning about it and more than anything, I love eating it. So when I'm allowed access to food which is literally available all day, from 7am to 10:30pm, I'm pretty stoked. For breakfast, lunch and dinner, there were extensive buffets with local produce and amazing locally sourced ingredients, even down to the fresh herbs which were taken from the chef's own garden!
The rooms were fantastic - really great size with a small balcony and individual air-conditioning units, which made so much difference, as it was reaching 34 degrees C during the day and was still hot at night time. The staff were so friendly and would go above and beyond to make sure everything was perfect. Upon entering the hotel for the first time, I just couldn't believe how grand it looked, I actually wondered if we were in the right place. The outside of the hotel was just as amazing, with a huge pool area and a long garden area which extended down to the beach, all full of sun loungers and more friendly staff. There was also a pool bar which served cocktails, hot drinks, soft drinks, ice creams and savoury snacks all day, which was just great. Banana ice cream is great. 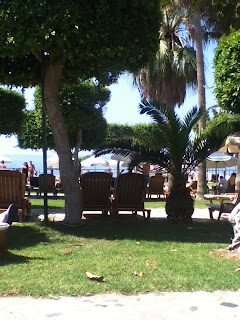 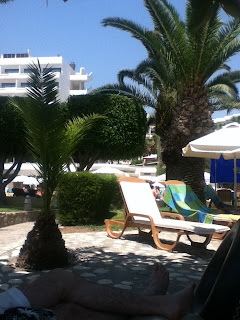 There are so many day trips and excursions available, which we found out through our rep, so on the Wednesday, Matt (the boyfriend) and myself went on a Jeep safari, which took us off-road to lots of different places along the southern coast, and also into some of the more mountainous regions. The trip was 75 euros each; we were picked up in the Jeep by a man named Zeus at 7:30am. After picking up a few more people, we drove through a prehistoric village with buildings that are thousands upon thousands of years old. During the drive, Zeus told us a lot about the island, including its history and mythology. He told us the story of how Aphrodite emerged from the sea as a teenager, slowing down on the side of the motorway to point out the three rocks which mark her birth place. It's well known locally that if you were to swim naked around the middle rock three times under a full moon, you are blessed with eternal youth. From there, we stopped half way up a mountain overlooking the most incredible panoramic view of mountains, the bays, and a small island just off the coast which birds stop off at during their migration from Europe to Africa. From there, we went to a gorge, which is formed of lime cliffs and has a small stream running through it. It's a really beautiful place and has signs in front of all of the plant-life with their names in Greek and English. From there, we went to a beach on which turtles lay their eggs. The bay is a turtle sanctuary, and every year for the last four years has seen a massive increase of the number of turtles who make it back to the sea and survive into adulthood. 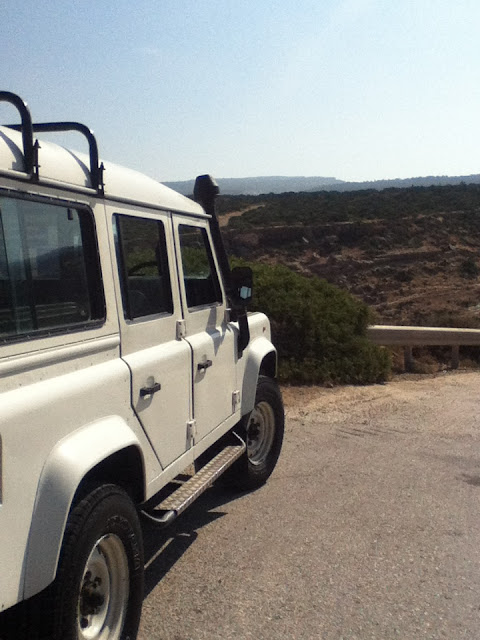 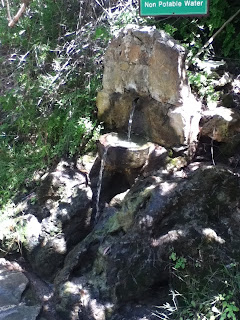 From there, we drove up to the peak of the mountain, where Zeus showed us a detailed map of Cyprus, showing us where we'd been and explained a little more of the history of the island. We then drove down to lunch, which was generously included in the price, and which was also fantastic. Salad, BBQ'd chicken, pasta, cous cous, roasted potatoes red/white wine, and the most incredible watermelon for dessert. We went the to see Aphrodite's bath, where it is said she was bathing when Adonis found her, leading to their love affair. Their in a fountain there which, if you splash yourself with the water, you are said to gain back ten years. Zeus proceeded to douse us all with the freezing water one by one, which was one of those refreshing shocks, a bit like a plunge pool. The actual bath looked incredibly refreshing, being as it's under a shaded cavern in the rocks surrounding it. Supposedly, if you bathe in it, you become a virgin again. 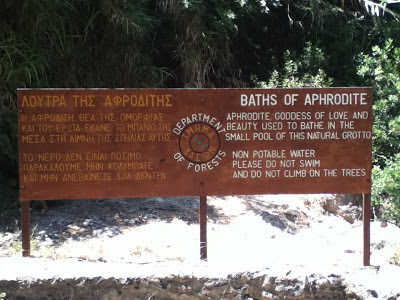 We then had a free hour at a very beautiful beach, where we got some freshly squeezed orange juice and one of the biggest ice creams I think I've ever seen! On the way back, Zeus stopped at the side of the motorwayto show us an aeriel view of Paphos, which is stunning, and on my camera. (pictures to follow) At various points, the Jeep would stop and Zeus would pick some leaves from trees and bushes which we then passed around the car to sniff. These included basil, lemon and aniseed, which is used to make the very distinctive Ouzo - a very potent alcohol which is very nice if you like aniseed. (One of the cocktails in the hotel was an 'Ouzo Special', which contained Ouzo, blackcurrant and soda water. It was have been pink, but it was not for the faint-hearted!)
On the Friday, we took a trip into northern Cyprus - officially named the Turkish Republic of Northern Cyprus, since 1974. We had to cross the boarder in Nicosia, so I have a twice stamped visa which I'm actually pretty proud of. (Especially since my passport wasn't stamped at all going into Cyprus or back into Britain.) We then drove up into Kyrenia, which is very beautiful and has lots of mountains. Whilst there, we visited a monastery which is incredibly old, and somewhat damaged by bombs, however has many of its original features and is incredibly beautiful. (Again, I have lots of wonderful pictures on my camera, so there's something to get excited about in the future.) We also went to Kyrenia Castle, which was believed to have been built by the Byzantines as long ago as the 7th century. It has since been extended substantially at least twice. In particular, we visited the shipwreck museum, which has some of the original vessels used to carry wine, olives, etc. which were on board at the time of its ruin. The courtyard of the castle is huge, and looks like it could be a fair-sized market/village square. Across from the shipwreck museum are the dungeons, which include quite detailed mannequins which showcase some of the torture rituals they used to carry out.  For more info about Kyrenia castle, here's the link to the Wikipedia page. All of the pictures from that day are on my camera, apart from this one which I took on my iPod as we were driving through Kyrenia: 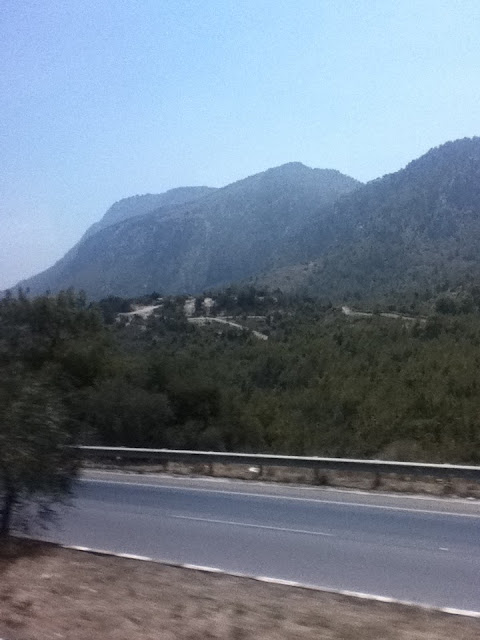 Other than that, we spent out time eating, drinking, swimming in the sea and being hot. As I said, I'll upload some of the other photos when I find/have my lead again. Thursday is creative again as normal, and if you have any suggestions for what I can review next Tuesday, feel free to leave a comment, tweet or email me; as I said before, all of the places you can find me are in my 'Talk to Me' tab at the top.

Thanks for reading and I'll see you Thursday! Laura
xoxoxoxox
Posted by Unknown at 12:20